You might have thought so with the infrequent nature of my posting here, but take that as a positive reflection on the state of Fedora as a Linux distro.

My latest problem related to an upgrade of Fedora 27 to  Fedora 28. After conducting the upgrade via the dnf upgrade plugin process, when I came to reboot my machine would get to the graphical login screen then freeze.

If I edit the grub boot options to start in run level 3 it would boot up and I could login quite happily, which I was doing with a series of reconfiguration and reboot cycles as I tried disabling services, reinstalling drivers and so on.

One positive, I have now learned about

and was using it quite a bit to see output from boot attempts.

My initial thoughts were that this was a problem with my graphics card, a Radeon RX460. I have had issues in the past getting it working.

So I tried changing BIOS settings to use integrated graphics instead of this PCI-e card, no luck there.

Turns out my Gigabyte z170x motherboard has an Intel feature called ThunderBolt.
In my fiddling with BIOS trying to turn off as many features as possible, this was the one that was causing my issues. After disabling Intel ThunderBolt, I can once again use my PC.

I've no idea if it's the specific combination of hardware (Gigabyte Z170X motherboard with Radeon RX460 graphics, connected via DisplayPort to a large monitor) or simply Fedora dooesn't currently like ThunderBoth, but for now at least, ThunderBolt is staying off on my system!

I guess the problems I'm seeing are just because of that, presumably the chippery had always been on, but only now is my graphical system trying to make use of it.
Posted by DaFoot at 08:35 No comments:

After waiting a for an update to my Linux Kernel from the Fedora repos (I don't fancy building my own just yet) the open source drivers for for my Radeon RX460 were installed successfully.

This seemed to sort out some of the issues I was having, the visual artifacts at higher resolutions particularly,  but didn't sort the issue of the screen going blank for periods of time. Which very quickly became incredibly irritating.

After convincing myself the drivers were ok (discussions of Fedora support forums), I started to wonder about overheating. Given the blackout seemed to happen most when playing video, but that shouldn't cause any real effort from graphics card like the Radeon RX460. Clutching at straws a bit with that idea. 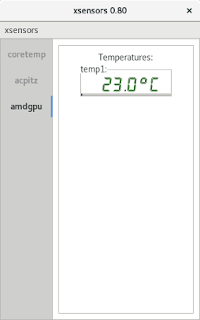 Back to the drawing board then.

More reading then. Started to wonder if the Benq BL2710 monitor was the issue, so started reading more reviews of the panel to see if any reviewers had a similar problem when testing.

I eventually found comments in a about the power save feature of the BL2710. Apparently it has a sensor on the front that attempts to detect if there is someone in front of it and shuts of the display if there isn't for a period of time.

This is indicated by flashing of red LEDs at the bottom of the monitor, something I noticed happening when I experienced the blackout issue.

Sure enough, after exploring the menus I found the option to turn off (ECO -> ECO Sensor -> Off) and did so. Since then everything has been working without problem.

I'm surprised I didn't find any other articles on this black screen "issue" with this Benq, it must affect other users too.

I was hoping changing from HDMI to DisplayPort would sort out my screen issues. To a degree, it did.

I can now use my screen at full resolution using the amdgpu driver from Fedora repositories but the intermittent, incredibly irritating, sporadic blank screen issues persists.

Another suggestion that came up from a forum was to try X11 instead of Wayland to draw stuff, that helped with a wonky dialog issue, but still no fix for the sporadic blank screen.

Getting to the point I'm almost tempted to try another monitor in case it's not software. That would be surprising though.
Posted by DaFoot at 14:18 No comments:

Display issues still being a nuisance

A while back I purchased a nice fat Benq BL2710.

Besides the frustrating front panel buttons, it seems to be a really decent monitor, which I'd be really happy with if I could get Fedora Linux to drive it correctly.

Initially I was using the onboard Intel graphics, which simply refused to offer the resolution(s) I want to run at (2560 x 1440).

So I decided to try a seperate graphics card. After some reading that suggested it may be workable with Linux I went for a 4GB Gigabyte Radeon RX460.

Now under Fedora 25 there are included open drivers for this GPU and it appears my system has them installed:

I've recently been battling with a Brother laser printer to get it to print from my Fedora (23) workstation. It had been working before, so compatability wasn't the issue, unless some library withing my system had changed. Turns out it was SELinux getting in the way (I usually have it off altogether as it causes me more headaches than I can be bothered with!). Running the command below seemed to sort it out:
Posted by DaFoot at 17:15 No comments:

Thankfully , it's the latter. Fedora has been mostly good to me recently, now running on 23.

I recently upgraded my hardware to an Intel i5 CPU and a Gigabyte 710X G1 Gaming 7 mainboard. A respectable setup for an home machine that isn't used for gaming. Editing my photos is suddenly so much more relaxing, now the computer has to wait for me and not the other way round!

Back to the topic in hand and the reason for this post.

Video playback. After sorting a bunch of issues with old nVidia drivers polutign the bootup of the machine (meaning I couldn't get to a stable desktop only CLI) I encountered an unexpected issue that seems small but will become incredibly irritating I'm sure.

This also happens when I try to skip to certain points in videos using the progress bar.

I suspect this is an issue with not having relevant drivers or video codecs or some such, but as I've not been able to find any hints in logs I'm at a bit of a loss at the moment.
Posted by DaFoot at 00:52 No comments:

A while back I posted about trying (unsuccessfully) to run some ASP scripts on my Fedora (20) box using XSP.

I knew nothing of ASP tech at the time, so I ended up doing a fair bit learning. Turns out ASP has been largely replaced by a newer version of the tech, ASPX. XSP has a half decent go at trying to run the scripts.

I was still getting plenty of issues, so ended up installing a Microsoft IDE on my Windows laptop and doing the work there. I forget what it was called, but I was very glad to have got the project running correctly under ASPX before the trial ran out! It was a nasty to work with when used to the likes of Eclipse and IntelliJ for Java and PHP development.

In brighter news, I've now migrated that project over to PHP so there is no longer a reliance on running a Windows server. Happy days!
Posted by DaFoot at 20:42 No comments: